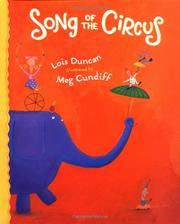 SONG OF THE CIRCUS

The circus’s smallest members snatch triumph from the jaws of disaster in this high-flying tale of heroism under the big top. A sudden flat tire in mid-performance sets off a chain reaction of spills and collisions that knocks the tiger’s cage open. Freed, the tiger leaps toward little Gisselda and Bop, a tiny clown—but instead of fleeing, they stand up to the beast, send it slinking away, then bow to the crowd as if it had all been part of the show. Cundiff sends stylized figures with wildly exaggerated proportions arcing and spinning through dazzling monochromatic backgrounds, matching Duncan’s (On the Edge, 2000, etc.) equally bouncy verse: “The rest of the Horses reared in their tracks / And Bareback Riders flew off their backs, / With one of them doing a loop-the-loop / To land in a pile of Elephant poop. / (There’s a lot of that at the Circus.).” Readers will demand ringside seats to see just why “you don’t play rough with the kind of kid / Who is raised in the world of the Circus.” (Picture book. 6-8)