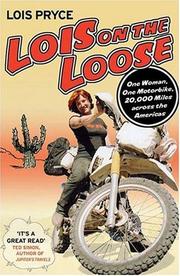 LOIS ON THE LOOSE

One Woman, One Motorcycle, 20,000 Miles Across the Americas

Another spunky gal takes things in hand and becomes empowered, this time astride a small Yamaha motorcycle with cell phone and e-mail ever at the ready.

Fresh from a desultory job at the BBC in London, Pryce carried on at 55 m.p.h., down the length of the Western Hemisphere from Anchorage to Tierra del Fuego. The tale of her nine-month trek has all the requisite road-trip ingredients: big bugs, bad food and lots of dirt. Indomitable Lois tells of venal bureaucrats, prepubescent border guards, good-looking biker guys and severe digestive distress. She tented in the wild Yukon and rode down the AlCan and Pacific Coast Highways, pausing for a visit with friends to a cheesy L.A. strip club. Pidgin Spanish, icky tacos and insects in the domain of Subcomandante Marcos marked the next leg of her trip, down the Pan-American Highway. Journeying through Central America, across the isthmus and on to South America, she encountered thieves, fixers and tatty digs, petty corruption and jolly drinkers. Machu Picchu, Lake Titicaca, the winds of Patagonia and all the rugged landscapes were fine settings for the cycling hijinks—and for an unpleasant companion’s nasty crash. Pryce also recalls some of the square-jawed natives along her way, including the sexy repair guys of the Andes. After a bit of pizza in the New World’s southernmost city, it’s back to London and propriety. And so we bid farewell to the rapture of the open road celebrated so cheerfully in this biker sitcom by a young woman who declares her “obsession with all things noisy, greasy and rockin’.”

A long ride on a dirt bike, on the mild side as often as the wild.