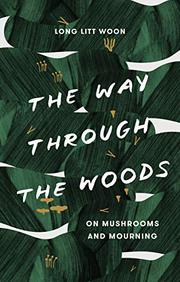 THE WAY THROUGH THE WOODS

On Mushrooms and Mourning

In this debut memoir, an anthropologist recounts how mycology eased her out of mourning.

Long’s husband, Eiolf, collapsed suddenly at his office and died at age 54. A “paler, stupider, ashen” version of herself, the Norway-based author took a beginner’s course on mushrooms at the Natural History Museum at the University of Oslo. Finding voluptuous, golden chanterelles and flavor-bomb morels gave her a sense of joy—“for me there is no doubt that my discovery of the realm of fungi steadily nudged me out of the tunnel of grief”—and she trained to become a “mushroom inspector.” In Norway, certified mushroom inspectors, who must learn 150 species, review foragers’ hauls (for free!) to ensure no one inadvertently makes a deadly error, like mistaking a destroying angel for a tasty meadow mushroom. Long focuses on many aspects of various fungi—beauty, oddity, edibility, toxicity, hallucinogenic properties, potential as antidepressants—and less on mourning. The two subjects don’t always mesh well, though the author makes interesting observations about loss—e.g., “the map of my friends and acquaintances was redrawn after Eiolf’s death.” She brings an anthropologist’s perspective to the book, considering various cultures’ differing views—the clouded agaric smells “perfumed” to Norwegians and skunky to Americans, for example, and Norwegian mycologists really don’t like talking about magic mushrooms, which isn’t the case in the States—and she unearths endless fodder to liven up cocktail conversation: “Members of the fungi kingdom are more closely akin to those of the animal kingdom and, consequently, to Homo sapiens, than to the plant kingdom!” The book is more a collection of edifying tales and facts than smooth narrative, but it’s entertaining nonetheless. Learning about glow-in-the-dark jack-o’-lanterns, puffballs that “smoke” when you smash them, or toothy hedgehog mushrooms never gets old. Anyone with an interest in the natural world will delight in Long’s sharp-eyed descriptions (and Viskari's line drawings) of fungi and her therapeutic rambles through Norwegian woods.

A wonder-inducing dive into the unique kingdom of fungi.