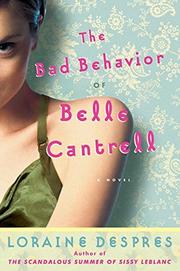 THE BAD BEHAVIOR OF BELLE CANTRELL

After losing her husband Claude the very day he returns from WWI, “flower of southern womanhood” Belle Cantrell bobs her hair in a symbolic gesture of emancipation that transforms her life, and shocks her small town of Gentry. Her narrow-minded neighbors should not be so surprised, since Belle is a remarkably forward-thinking former child bride who named her daughter after pioneering suffragist Elizabeth Cady Stanton, and who pays her loyal black employee Luther a “white man’s wage.” With Claude gone, Belle struggles with the guilty belief she may have “killed” her husband, who died in a saloon fight ostensibly defending her honor. (Seems there were some photographs of her being arrested in New Orleans on an “indecency” charge for swimming while wearing a too-revealing wool swimming costume.) Her grief is considerably eased when she takes up with Rafe Berlin, the shell-shocked vet brother of her best friend Rachel, who just happens to be Jewish. And a Yankee. And married. As if that were not enough, Belle tangles with Cajun scoundrel Beauregard “Bourrée” LeBlanc, a sinfully attractive young man she hires to help her run the thriving farm Claude partially left to her. Belle’s ill-advised dalliance with Bourrée—whose idea of a wholesome family outing is to take Belle, her daughter and mother-in-law to a Ku Klux Klan picnic—sets in motion a rip-roaring chain of events. Soon, Belle is called upon to save Rafe and his family after the spurned Bourrée convinces his white-sheeted “brothers” to go after the only Jews in Gentry. In this often funny prequel to The Scandalous Summer of Sissy LeBlanc (2001), former screenwriter Despres demonstrates a fine ear for witty dialogue, even if the moronic Klansmen and assorted bigots Belle squares off against make easy targets.

Breezy and enjoyable despite some southern-fried clichés.