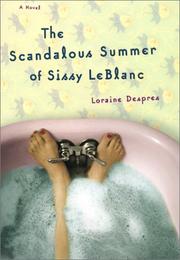 THE SCANDALOUS SUMMER OF SISSY LEBLANC

It’s summer. It’s hot. And Sissy LeBlanc is bored and frustrated and tired of coping with her cranky kids, but there’s nothing she can do about it—until telephone lineman Parker Davidson comes back into her life. One hot kiss and she’s ready to follow him anywhere, although he’d just as soon not ruin her reputation—or deal with her husband Peewee. Too bad her blackmailing brats actually saw her smooching the gorgeous Parker. But their silence can be bought: Chip and Billy Joe want a deluxe chemistry set; Marilee wants a doll in a suitcase. Sissy complies, for who could forget a hunk like Parker—MVP in high school football, a WWII hero, and the man who got away, as far as she’s concerned. She’s understandably piqued when Parker shows up with a girlfriend—who turns out to be a distant relative Sissy never knew she had: her cousin Clara, the not-very-black daughter of her white uncle Tibor, an ambitious local politician and outspoken proponent of racial purity. Parker persuades her to hire Clara as a maid, and things go downhill from there. Clara believes Parker wants her only because she looks so much like Sissy, and quits. But Sissy is lost without the young woman’s help, not to mention pining for Parker, who’s driving her crazy (he calls for sweet talk every time he’s up a telephone pole). She finally agrees to a rendezvous in New Orleans, where she runs into her father-in-law, a Cajun stud named Bourrée LeBlanc. (A detour: Bourrée got her pregnant when she was 16 and took her to a backwoods abortionist, but scared Sissy opted out and married Peewee instead, passing off nasty Chip as his child.) Eventually, Sissy resolves to run away with Parker, but cynical Bourrée tells Peewee everything—and all hell breaks loose.