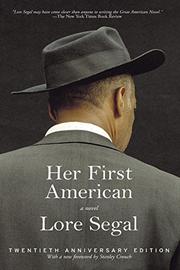 An immigrant's haphazard yet buoyant first steps through America, an unlikely romance, a sliver of very special history: Segal (Other People's Houses, Lueinella) shrewdly intertwines these three fetching strands of material in a quiet, funny, slyly affecting novel--one that always remains under delicate control while seeming to teeter on the edge of preciousness or sentimenality. Early in the 1950s Ilka Weissnix, 21, a longtime refugee from Vienna and Hitler, finally reaches N.Y.C.--installed in a Manhattan apartment by her intense cousin Fishgoppel, then treated to a trip West when she complains that New York (with German-speakers on every block) is not America. And it's in a railway-side bar, somewhere around Nevada or Utah, that Ilka briefly meets her first real American: columnist Carter Bayoux, who's middle-aged, overweight, courtly, alcoholic, black. . . and on his way back home to New York bohemia. The odd Ilka/Carter relationship will bloom in Manhattan, then--with educational outings to Harlem, to the UN (where Carter had something of a diplomatic career), with a steady expansion of Ilka's colloquial fluency. (""Ilka thought that's what she wanted to be--a bitch and a looker. Think of the opportunities!"") The affair, though always impromptu, intensifies--despite intimations of doom, despite misgivings. (""She observed how the fold of the back of his neck bulged over the collar of his sport jacket and decided she must start to go out and see other people."") Soon, in fact, Ilka is caught, not too unhappily, between ""the two abysses in her life"": Carter, holed up in his hotel or carted off to ""the bughouse""; and her long-lost mother, now in N.Y. at last, paralyzed by fear and survivor-guilt. But, before there's an inevitable parting, Ilka will also sample the joys and subtleties of Carter's world: the integrated black/Jewish intelligentsia of the Fifties--with its inner tensions (Jewish anti-Semites, stuffy vs. earthy black intellectuals) and its distinctive repartee. (From a famous black novelist: ""What do you mean 'Johnny Ray is not an artist'?"") Culture-clash romance, more richly, resonantly handled than in Alison Lurie's Foreign Affairs--with sad charm in the character sketches, fine tuning in the varied dialogue, and just the right emphasis on the timely, touchy matter of black/Jewish soulmate-ship.