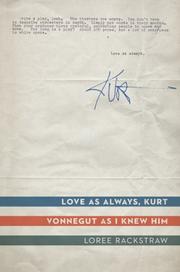 Vonnegut As I Knew Him

Adorning her text with enough exclamation points to resemble an exuberant teen’s diary, the author recounts her long relationship with the noted American novelist.

It began in September 1965 when Rackstraw, a single mother, was enrolled in the married Vonnegut’s fiction class at the Iowa Writers’ Workshop. Coy about the extent of their intimacy, she remarks only that they “broke a couple of taboos that first year.” She remembers a bird singing when he first embraced her in a bucolic Iowa grove. She tells some Workshop stories: Parties at Andre Dubus’s place were “great”; Nelson Algren was cruel to one of her classmates; Richard Yates had issues. Rackstraw eventually married again, and she became friends with Vonnegut’s first wife, Jane, and their children. The author, however, remains cool throughout to Jill Krementz, the writer’s second wife, and recalls times when Vonnegut planned to divorce her. Rackstraw acknowledges her friend’s emotional, depressive side—he took negative criticism poorly and became gloomy at weak sales or rejections—but also highlights how hard he worked to write prose that seemed effortless. His later novels in particular, she notes, went through multiple false starts. The memoir reveals some questionable ethics on its author’s part as well: She wrote very favorable reviews of some Vonnegut novels for the North American Review, and readers may wonder if she told her editors the extent of her intimacy with him. Rackstraw follows Vonnegut’s career chronologically, reporting what he published, where he spoke (how the crowds loved him!) and what he wrote and said to her—all in terms most flattering to both parties. She quotes few letters in their entirety but does not neglect, for instance, to quote Vonnegut’s occasional encomiums to her intelligence and achievements.

Though tendentious, Rackstraw’s account offers enough interesting material on Vonnegut and his work to please his many fans.