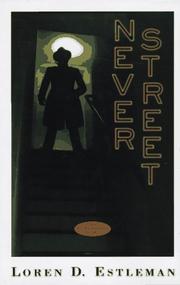 Amos Walker, waiting in the wings ever since Sweet Women Lie (1990) while Estleman worked on his epic cycle of Detroit crime novels (Stress, 1996, etc.), is back—back to the 1940s, it seems, since his search for video producer Neil Catalin, whose quiet demeanor masked an obsession with film noir classics, takes Walker chasing down the same rain-soaked streets. Walker's client, Catalin's wife Gay, wonders what his former mistress, two-bit actress Vesta Mannering, knows about his disappearance, even though she swears she hasn't seen him for over a year. Walker wonders what Catalin's partner, Leo Webb, knows about the meeting Catalin stalked out of right before he stepped off the edge of the earth, and when it is that Vesta's ex, the Shotgun bandit who went to jail when he wouldn't tell the cops the location of his $92,000, will be out on the street again. The natives on Mackinac Island, where Catalin's psychiatrist Ashraf Naheen plies a busy trade in upscale headshrinking, wonder how long it'll be before Naheen's secret videotapes of all his sessions lead to fireworks. And the police wonder how many more corpses they'll be finding before they can bring the missing Catalin to book for a series of murders Walker's convinced he hasn't committed. But the answer to all these riddles may just be on-screen—in the 50-year-old Dick Powell suspenser Pitfall—for all to see. Detroit's summer of power outages provides a brilliant backdrop for Walker's Chandleresque storytelling at its most gaudy and orchestral, with enough lush villainy for three ordinary novels.