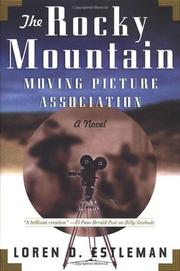 31286676.399 Estleman, Loren D. THE ROCKY MOUNTAIN MOVING PICTURE ASSOCIATION Estleman has switched fictional settings before from Prohibition Detroit (Whiskey River, 1990, etc.) to the Hollywood of early silents, as in Billy Gashade (1997). His latest, set largely in 1913, is something of a sequel to Billy. Burgeoning but unpublished young writer Dmitri Andreivitch Pulski, who admires Jack London and writes under the pen name Tom Boston, has garnered 172 rejections and, waiting for his ship to come in, works for his father, who owns the Sierra Nevada Ice Company. One day after he’s just helped cut up eight tons of ice from a frozen lake, a request comes in from a Hollywood studio for ten tons of same. His father sends Tom/Dmitri down to Hollywood to check on the deal. Tom’s romantic interest is exotic blossom Adele Varga, the secretary/leading lady for director Buck Bensinger, whose Rocky Mountain Moving Picture Association is shooting The Trail of “98, the Alaskan gold rush tale that made all that ice necessary. When Tom says he’s a writer and that Jack London will undoubtedly sue Buck for lifting his plot, Buck hires Tom to sponge all the Jack London out of the script. Meanwhile, the sheriff threatens to put Buck’s equipment on the auction block if he doesn’t pay off a printer. On his new job, Tom the innocent wanders about the set with Adele, while Estleman packs in sparkling filler. A leap ahead to 1927 tells of Tom/Pulski’s visit as a big-time realtor to Hearst’s castle at San Simeon; then it’s back to 1913 and Buck’s fight against the Edison Trust. When his leading cowboy star dies on heroin, Buck hires a famous desperado just released from San Quentin to replace him. Buck takes to drink; Adele turns producer and makes a star of desperado J. W. Starling. Jump to 1948 for a nostalgic recap. Masterful description floats through a story that’s held together by sheer charm.