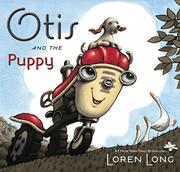 OTIS AND THE PUPPY

From the Otis series

Lovable Otis the tractor is back for a third adventure, in which he overcomes his fear to help out a new canine friend.

Otis and his animal buddies, including the calf and bull from previous titles, play hide-and-seek after working on the farm. With a “one-putt, two-puff, three-puttedy four-chuff,” Otis begins his turn as “it,” which he especially likes. One day, the farmer brings an adorable young pup to the farm, and he immediately wins the hearts of all with his wriggling and wagging and an abundance of wet kisses. But after night falls, the puppy whimpers when he is left alone in his very dark doghouse outside the barn. Otis invites him inside to sleep next to him, and a special friendship forms. The story takes a turn when the puppy, instead of hiding as he is supposed to, gets distracted. In this spread, Long separates the text from what he depicts in the classic-feeling illustrations in gouache and pencil. While the language describes Otis discovering his friends in their silly hiding places—bull is “behind a lone dandelion”—a series of spot images shows the pup following a butterfly until he becomes hopelessly lost in the dark forest. Long contrasts the bright daytime farm scenes with the deepest darks of night to heighten the drama, for Otis must first cope with his own fear of the dark before rescuing his friend.

Fans of Otis will not be disappointed with the satisfying ending that results in a creative solution and a most happy reunion. Seek this out—“game on!” (Picture book. 4-7)