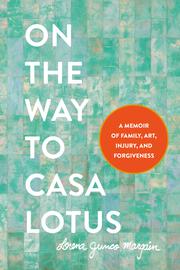 ON THE WAY TO CASA LOTUS

A Memoir of Family, Art, Injury, and Forgiveness

In this debut memoir, an art collector tells of undergoing surgery in her early 30s and how it upended her life and destroyed her health.

In this moving story of hope, empowerment, and forgiveness, Margain grapples with a life-altering mistake and chronicles her emotional journey to Casa Lotus—a home in Texas Hill Country that, as the book opens, she and her husband, Eduardo, have planned but not yet built. The Mexican-born Margain notes that “family is everything in Mexican culture,” and she describes how she moved with her own family from Monterrey to Mexico City at the age of 12 and, later, to Austin, Texas, carrying her culture with her. Endearing scenes of later meeting her husband in New York City, and their years of marriage and building the Margain-Junco Collection of art together, pepper the narrative. One day, several months after her son was born in 2012, the 30-something author visited her doctor and told him that she sensed that something was wrong with her, although she lacked “any real symptoms.” At the time, Margain was raising three young children, including a newborn, and dealing with the loss of her grandmotherand her sister’s cancer diagnosis. Her doctor told her that she might have depression, but she felt that something else was going on. She visited multiple physicians, and a CT scan later revealed a tumor on her adrenal gland, which a surgeon removed. However, something went wrong during the procedure, the author says, which profoundly altered her life. Margain’s remembrance superbly details how people can find freedom and healing in forgiveness, and her story will resonate with readers who are seeking hope, a sense of spirituality, and faith that things happen for a reason. With that goal in mind, the memoir cites Buddhist teachings from spiritual teachers such as Thich Nhat Hanh, biblical passages (“The truth shall set you free”), thoughts from Hindu gurus, and secular conceptions of integrity and morality. She also offers insights on how anger—particularly female anger, which, she asserts, is often repressed—can also be a potent productive force.

An often beautiful survey of tragedy and rebuilding.