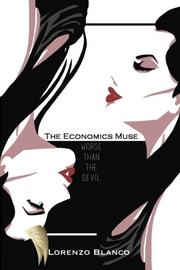 THE ECONOMICS MUSE I

A novel tells the tale of an immortal muse behind economics.

Blanco (El Economista Desconocido, 2012) presents the fantastical story of the 10th Muse: an immortal woman with bat wings, a dragon’s tail, and a deep understanding of the social science of economics. Much like the other Muses of ancient Greek mythology, the Muse of Economics is a daughter born of Zeus and Mnemosyne. Unfortunately for the Economics Muse, Aphrodite, the infamous goddess of love and beauty, dislikes her intensely. As Aphrodite puts it, “You practice a dismal, pessimistic science that brings only darkness and drudgery, not inspiration, to the mortals.” After a stint in the underworld, the Economics Muse begins appearing to mortals throughout history. The narrative follows her as she attempts to get the humans of the past to understand the importance of concepts their descendants would come to take for granted, such as the division of labor and the costs of opportunity. Taking into account humanity’s bloody and ignorance-filled history, the story chronicles the Economics Muse’s uphill battle. Add in her struggles with the vampiric creatures created by Aphrodite and known as Venusians, and the result is a tale that is bizarre, brutal, and edifying. Imagine Buffy the Vampire Slayer with a penchant for economic laws rampaging through a European history textbook. In other words, if, based on the title, readers are expecting a cute way to learn about economic principles, they have come to the wrong place. The story is full of slaughter both historical (a massacre in Flanders in 1302) and otherworldly (the presence of Venusians at that tragedy), and the Economics Muse is hardly a passive bystander. But her violence, along with her sassy attitude (“Your peasants almost pulled it off,” she remarks to the severed head of John Ball), can distract from the main objective, which, it seems, is to make economics more palatable. Nevertheless, in this endeavor, the work succeeds. If readers learn nothing else, the book makes it clear that economic principles have evolved over the ages. The tale shows, for instance, that collecting interest on loans, a practice that was once banned as usury, is now—with or without the help of a butt-kicking immortal—commonplace.

This illuminating narrative takes a riotous route to educating readers in economics.