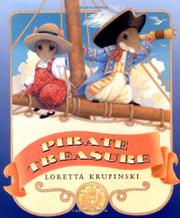 “Red sky at night, sailors delight. Red sky at morning, sailors take warning.” Dispensing these and other chestnuts of weather wisdom, a pirate captain discovers what real treasure is after saving the residents of a flooded town. Forced ashore temporarily while making repairs to their damaged ship, Captain Oliver and first mate Rosie are shunned by the timorous folk of nearby Mousam until, forewarned by gathering clouds (“When mountains and cliffs appear, a lot of showers and rain are near”), the two sail to the rescue. Krupinski casts the entire episode with mice who are clad, mostly, in toddler clothes (except for his blue jacket, Captain Oliver isn’t particularly piratical, and Rosie even less so), and for extra measures of cuteness, look directly up from the page with shiny, widely set black eyes. Captain Oliver’s final comment makes the “friends are the true treasure” lesson explicit. Nothing subtle here, but that may be the best course for some young audiences. (Picture book. 6-8)