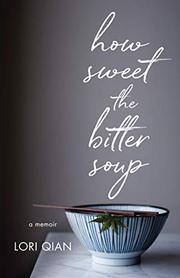 HOW SWEET THE BITTER SOUP

In this debut memoir, writer and public speaker Qian describes how a fateful decision to take a teaching job in China changed the course of her life

Around the year 2000, the author was finding that her life in Chicago was becoming untenable. Her parents were broke, her father’s Alzheimer’s disease was worsening, and she was overworked from trying to cover their expenses. When she received an offer to move to China to teach, it seemed like the perfect solution; she could make more money to send to her parents, and she would have the necessary space to take back some control of her own life. She flew to Guangzhou, where she began teaching second-graders and immersing herself in the unfamiliar culture of the People’s Republic of China. The author experienced an unexpected surge in spirituality, as well as a new appreciation of travel and exploration: “Now that I was here in China, being given this incredible chance to learn and grow, I didn’t want to waste one moment,” she recalls. “There was something to learn, either about China or about myself, all the time.” Although being far away from her family was difficult for her, she soon met an attractive Chinese teaching assistant at her school, Qian Zhi Ming, whose “English name” was William. A romance developed, and the author quickly realized that China was not a temporary stop-off for her, but a place that would become a permanent part of her life. Qian writes with detail and humor, elegantly capturing intercultural moments, as when her mother asked her about William’s political affiliation: “So, is he a communist?” (He wasn’t.) The details of planning her wedding in William’s hometown are particularly engaging, as their engagement was met with no small amount of surprise from locals. Their marriage gives the book a more novelistic structure, which sets it apart from other expatriate remembrances; for example, when William develops tuberculosis, it adds a very real element of uncertainty to the author’s adventure. There are surely more action-packed books about Americans in China, but Qian’s smooth prose and sympathetic affect make this memoir a compelling read.

A smoothly told, down-to-earth tale of an American abroad.