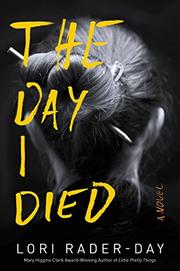 THE DAY I DIED

A handwriting analyst is forced to face her own traumatic past in Rader-Day’s (Little Pretty Things, 2015, etc.) latest.

Anna Winger never stays in one place for too long. Ever since she fled her violent boyfriend in order to raise her son in safety, she's become an expert at avoiding intimacy and staying off the grid. Ironically, she lives her life by drawing conclusions about others based solely on their handwriting while distancing herself from human relationships. Working as a consultant for federal and local law enforcement, Anna gets drawn into the drama when she’s referred to the sheriff of Parks, Indiana, to help with a missing child case. On top of this mystery and a reluctant attraction to the sheriff, she’s dealing with her 13-year-old son, Joshua, who's begun to act out and hang around with a bad crowd responsible for painting angry graffiti around town. When Joshua disappears, Anna has to return to her hometown to face the ghosts of her past and the person she used to be before she staged her own disappearance. In a rather too convenient twist, the answer to the mystery of the missing boy also lies in Anna’s hometown. Though the novel builds a deeply human story of fear, error, and redemption, it’s incredibly slow to get there. Anna’s paranoia and loneliness, while understandable, keep her isolated from the reader as well; it takes a long time to get invested in her voice because she’s so stingy with the details in the beginning. By the end, however, Anna’s story carries much more weight than the problem of the missing boy.

This finely layered novel succeeds more as a human-interest story than as a mystery.