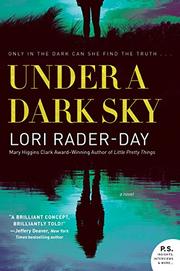 UNDER A DARK SKY

A recent widow confronts her demons and a whole lot more during a trip to the Michigan wilderness.

Eden Wallace has always been afraid of the dark, but that didn’t stop her husband, Army veteran Bix Wallace, from booking a cabin in Michigan’s Straits Point International Dark Sky Park to mark their 10th anniversary. Ironically, Bix misses the celebration when his drunken driving ends his life, along with those of four others, nine months before the big day; it’s not till after his death that Eden even learns of the reservation. Even worse, when she arrives at Dark Sky Park, she realizes that Bix, whether deliberately or not, didn’t book the whole cabin, only a suite in a building she’ll be sharing with five college chums and the new girlfriend of one of them. Dev, Paris, Sam, and Martha all make it clear that they’d love to see Eden leave. Only Malloy and Hillary, his new girlfriend, make any gestures of friendship, and those are cut in half when Eden’s awakened by a scream that pulls her to the kitchen, where Malloy is lying dead, a screwdriver in his neck. Since there’s no chance that his demise was accidental, his old buddies instantly fall to accusing each other as well as Hillary and Eden, the newcomers who’ve crashed their circle. The questions posed by Park Director Warren Hoyt, Emmet County Sheriff Jeffrey Barrows, and Officer Bridget Cooley will all play a role in determining whodunit, but not before another participant in the reunion takes a header down the stairs, still another is poisoned, and Eden, still grieving the death of her husband, realizes that she has a previous connection to the group she’s been thrown into that’s both unwelcome and ugly.

Rader-Day (The Day I Died, 2017, etc.) juices her young-widow setup with enough soul-searching, menace, and dirty linen to make you think of Mary Higgins Clark with teeth bared.