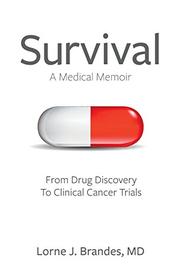 Brandes offers an absorbing, exhaustive true story about the obstacles researchers faced while ushering a new cancer drug through development and testing.

Although he has authored numerous scientific papers, this is the first book from the author, a retired University of Manitoba oncologist. In the 1980s, his lab at the university’s Institute of Cell Biology did research involving the breast cancer drug tamoxifen, specifically looking for a substance that would bind to “antiestrogen binding sites” within cells. To that end, he says, they synthesized an antihistamine called DPPE (also known as tesmilifene), which appeared to curb unwanted uterine growth, prevent tumor formation, and increase chemotherapy drugs’ effectiveness up to tenfold. A grant materialized from the National Cancer Institute of Canada, and Bristol-Myers expressed interest. It wasn’t all smooth sailing, however. As years passed, funding sources fell through, papers were rejected, and trials produced mixed results. In 1997, the researchers’ MA.19 phase-three DPPE study finally launched but was axed early when it produced no noticeable improvements. Brandes felt this action was premature; indeed, he says that follow-up results indicated that DPPE produced 50 percent longer survival in breast-cancer patients. Meanwhile, Toronto’s YM Biosciences resurrected DPPE for studies on prostate cancer and in 2004 initiated a new breast-cancer trial. That one, too, showed no initial benefits and so was canceled in 2007. This is not a typical story of triumph against all odds; instead, it’s a realistic picture of how science works: small steps forward despite regular setbacks. Brandes makes a gripping, journalistic storyline out of what could have been a dry compilation of facts. Re-created dialogue and photographs enliven this labor of love, and short, digestible chapters also help. The author takes time to describe everyone who crossed his path, evincing real interest in these people’s values and idiosyncrasies; a number of the book’s players died along the way, so this book serves as a worthy elegy. At times, the level of detail, which requires a six-page who’s who list and hundreds of footnotes, can be overwhelming for laymen. However, anyone can appreciate its inside look at the bureaucracy, heartache, and political machinations involved in scientific investigation.

A personal, lively, and scientifically rigorous account of cancer-treatment research.