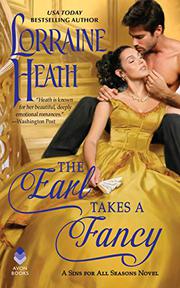 THE EARL TAKES A FANCY

A bookstore owner whose family has high expectations for her marriage prospects falls in love with a neighbor who could undermine those plans—or not.

Fancy is the youngest sibling in the lowborn Trewlove crew, who have taken the Victorian London town by storm. Her older siblings have all made fortunes, and all but one has married well, but she’s well aware that they intend for her to marry best. “The man had to be titled. Not the second son or the third, but the first.” She is determined not to disappoint them but also wants to be happy. She loves running her bookstore, using it as a community outreach center with an ad hoc lending library, children’s storytime, and adult literacy classes. As her introduction to society approaches, she meets her new neighbor, Matthew Sommersby, and what she doesn't know is that he's actually the Earl of Rosemont, just coming out of mourning for his wife and hiding from society since every eligible lady wants to marry him. When he first meets Fancy, he believes she’s a scheming debutante, yet as the two share a variety of adventures across London and she convinces him to tutor literacy students, Sommersby begins to look at the world through new eyes and is confused by Fancy's open nature and generous spirit. Fancy is falling in love with Matthew but feels obligated to marry well, and Matthew waits too long to tell her his true identity, causing a rift between them and risking their happiness. Heath continues her charming Sins for All Seasons series with two captivating main characters and the regular cast of fascinating Trewloves, though Matthew’s continued conviction that Fancy is conniving wears thin.

THE DUCHESS IN HIS BED
by Lorraine Heath
Fiction

THE SCOUNDREL IN HER BED
by Lorraine Heath
Fiction

WHEN A DUKE LOVES A WOMAN
by Lorraine Heath
Fiction

BEYOND SCANDAL AND DESIRE
by Lorraine Heath
Fiction

A CHRISTMAS TO REMEMBER
by Lisa Kleypas
Fiction

THE VISCOUNT AND THE VIXEN
by Lorraine Heath

BRINGING DOWN THE DUKE
by Evie Dunmore
Fiction

HOW TO CATCH A WICKED VISCOUNT
by Amy Rose Bennett
Fiction

A MATCH MADE IN LONDON
by Christina Britton
Newsletter sign-up