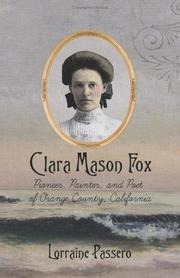 A beautifully illustrated book by a former teacher that sheds light on the intriguing life of a pioneer woman.

Passero’s debut tells the little-known story of Clara Mason Fox, an artist and poet who led a rather adventurous, exciting life. Fox, the author’s husband’s ancestor, was a member of a pioneer family who moved to California in 1887. She later traveled to New York to attend art school and became a painter and poet, capturing some early images of Laguna Beach and Orange County. Passero’s project was spurred by the discovery of a box in a family attic, and it’s a labor of love that sheds light on a fascinating time in American history. She describes her extensive research in her quest to discover as much about Fox as she could. The author worked as a teacher for many years and this book seems to be aimed in part at younger readers; as a result, she weaves in sentences such as “Imagine what it was like not having any of these [modern] conveniences” to help bring the setting to life. Her inclusion of some of Fox’s paintings and sketches also works very well, resulting in an unusual combination of text and visual art that illustrates Fox’s artistic talents. The author sometimes fleshes out historical context and descriptions of early California landscapes at the expense of Fox’s story, and readers may find themselves wanting to know more about this pioneer woman’s inner life. That said, the book provides a good jumping-off point for exploring both Fox’s life and the history of the state she loved so much. Passero reveals that local California organizations have recently shown interest in Fox’s work and that some of Fox’s paintings will be exhibited at the Huntington Library in San Marino. She says that she hopes to continue generating interest in Fox’s life and work, and with this book, she seems to be doing a great job of making that happen.

An unusual, engaging historical biography of a California artist.