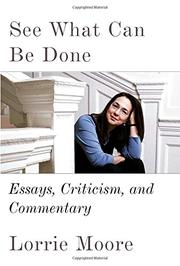 SEE WHAT CAN BE DONE

The award-winning fiction writer gathers essays written over the past three decades.

Reviewing Claudia Roth Pierpont’s Passionate Minds, Moore (English/Vanderbilt Univ.; Bark: Stories, 2014, etc.) offered generous praise for the collection of literary profiles: “with its unintimidated questions and explorations,” the book, she wrote, “is provocative and bracing, a wizard’s mix of innocence and fire.” Much the same can be said of these articles, reviews, bits of memoir, and commentaries, many published in the New York Review of Books and the New York Times. The collection opens with a review of Nora Ephron’s Heartburn which Moore wrote for Cornell’s literary magazine in 1983 and ends with an essay about blues guitarist Stephen Stills, whose concert Moore attended in “late-middle-aged ecstasy” in 2017. An astute, sympathetic reader, she appreciates the “friendly irony” of Bobbie Ann Mason’s stories; Don DeLillo’s “ability to let America, the bad dream of it, speak through his pen”; and Joyce Carol Oates’ “richly witty and despairing” Broke Heart Blues. Moore defends the controversial choice of Joan Silber’s Ideas of Heaven, a novel as linked stories, as a finalist for the 2005 National Book Award: Silber writes like “a graceful swimmer on a leisurely swim, though her brisk, radiant prose chops the water like a sprite.” Although most pieces focus on books, Moore rings in on a few TV shows, including The Wire, which she found riveting for its “admirable and unblinking look at a cursed people—America’s largely black and brown urban underclass”; and the “legitimately brilliant drama” of the NBC series Friday Night Lights. On politics, Moore can be unsparing in her disdain: in 1998, during the Starr investigation of the Lewinsky scandal, she wondered at the public’s apparently sudden shock and anger about a man who always seemed to her “a charming shark, a user, a yuppie, a bad actor, and a sexy, lying fool.” She skewers Trump as “part Crazy Eddie, part Henry VIII, part AWOL Andrew Jackson…in it for the adventure and applause.”