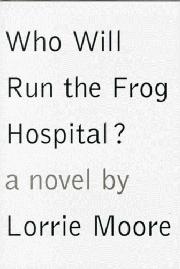 WHO WILL RUN THE FROG HOSPITAL?

Moore's (Like Life, 1990, etc.) account of a disillusioned American in Paris recounting a childhood friendship feels like rereading a diary entry about that first middle-school dance- -dreamy, tender, embarrassing, and endlessly enticing. (A shorter version of this book appeared previously in the New Yorker.) Berie Carr, a successful photography curator, has reached the point in life where social occasions demand that one speak of ``one's upbringing and be amusing at the same time.'' No problem here. There's plenty of comic fodder in her parents (cold Baptists who took in foreign students, political exiles, and foster children), her hometown of Horsehearts, NY, (a typical small town, across the border from Quebec), her summer job (a ticket-taker at a two-bit amusement park called Storyland), and her long-awaited pubescence (the word ``developed'' filled her with dread; she avoided all dresses with darts). But now she and her philandering husband vacation in Paris, making PÇpÇ LePew jokes as a brief respite from petty quarrels about where they are or where they're going: ``the questions no longer just metaphorical but literal, replete with angry pointing and some disgusted grabbing of maps, right out of the other's hands.'' Berie looks for answers to the present by returning to the past. In Horsehearts, Silsby ChaussÇe, a beautiful girl who played Cinderella at Storyland, was Berie's best friend. The two smoked cigarettes together, used fake IDs to get into bars, stayed out all night, sneaked liquor from their parents' stashes—the usual stuff. But gradually, when Sils got breasts and then a boyfriend and then pregnant, she moved into a new world where Berie couldn't follow. Then, Berie went off to boarding school and college, and finally Sils was left behind. Sifting through these memories, Berie finds answers about love and kindness and hope that, even if they don't change her life, make it more livable. Moore's voice sings and soars in this perfect little book—too bad it ends so soon.