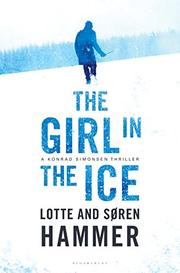 THE GIRL IN THE ICE

A killer who preys on beautiful women faces off against a team of Danish investigators.

Konrad Simonsen—variously referred to as “Simon,” “Konrad,” and “Simonsen”—is Copenhagen Homicide’s Chief Inspector. When he’s called in as he’s about to leave on a rare holiday and asked to lead the investigation into the murder of a woman found frozen in the ice not far from the site of an American installation that has since been decommissioned, he and his partner, Arne Pedersen, realize they may have a serial killer on their hands. Maryann Nygaard has been dead since she disappeared back in 1983, but her body shares one odd trait with another dead woman: they both had their fingernails cut by the killer. Gathering his team—investigators Pauline Berg and the Countess—the Danish detectives soon connect Maryann's killing to the solved murder of Catherine Thomsen, who died in 1997 and whose father killed himself after being accused of her slaying. Filled with guilt and determined to find the culprit, Simonsen and his detectives soon settle on a suspect and begin to unravel his life. The Hammers, a brother-and-sister team, have created a universe populated by some of the least interesting and most wooden characters ever to lead a police investigation, and they toss in clumsy, often bizarre dialogue for good measure. Rather than showing a steadily progressing inquiry as a good police procedural should, their meandering investigation seems more like a series of lucky guesses and chance discoveries. The foreshadowing reads like padding, and the presence of a character known as “the Countess” on a modern-day police department is mystifying. Readers will care little whether or not the murderer is apprehended and even less about the team assembled to find him or her.

Fans of Scandinavian noir won’t find much to like about this jumbled entry in the field.