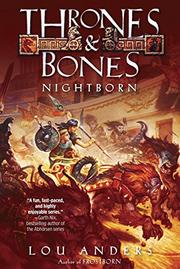 From the Thrones & Bones series, volume 2

Caution: a wyvern’s talons might pluck you up and drop you smack in the middle of a legendary quest.

Indomitable duo Karn and Thianna went their separate ways after battling the undead and outwitting ornery dragon Orm in Frostborn (2014). Karn now lives the life of a lauded hero. Content but somewhat jaded, he pines for the excitement and camaraderie he shared with Thianna. Enter Orm, who recruits Karn to seek the second Horn of Osius, an ancient relic capable of commanding dragons (Orm digested the first horn in book one to safeguard his kind). Karn is reluctant until he learns that Thianna was the initial recruit and has since disappeared. As Karn endeavors to solve an ancient riddle that will lead him to the horn and, more importantly, to Thianna, reminders abound that a soft heart is compatible with strength and resilience. As he did in the preceding volume, Anders presents a captivating world of richly imagined biomes, grim outlooks, plenty of gaming, and fantasy fauna (giant bats, gnomes, a pride of manticores preoccupied with manure). Whereas the first book was characterized by a fair amount of adult guidance, this tale is primarily propelled by young protagonists and antagonists (an enthralling doppelgänger dark elf pair also seeks the horn). In turn, Karn and Thianna are more defiant, less naïve, and have more to lose this time around—namely each other—but they refuse to lose themselves.

A winning testament to the value of friendship and to a surly dragon’s power of persuasion.