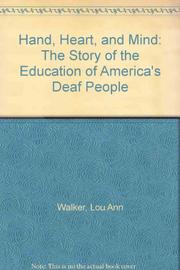 The Story of the Education of America's Deaf People

Building toward the 1988 ``revolt'' at Gallaudet University, when student demand for a deaf president raised public consciousness regarding the needs, rights, and capabilities of the deaf, Walker—a sign language interpreter and the daughter of deaf parents—traces the status of the deaf since ancient times. She describes cruel discrimination, based on the belief that the deaf were mentally defective, in Europe and America; early schools in France and Britain; and, especially, the 19th-century efforts of the Gallaudets (father and son) and Alexander Graham Bell to educate the deaf in the US. The feud between Bell, who (with regrettable condescension) espoused what's now called ``mainstreaming,'' and Edward Gallaudet, champion of signing over speech, is perpetuated in the ongoing debate over whether deaf children should be raised as handicapped members of the larger society or as ``Deaf'' people with their own sophisticated language and culture; concluding with an inspiring gallery of role models (deaf lawyers, actors, educators, a figure skater) Walker makes a good case for the evolving Gallaudet philosophy without ruling out the other's benefits. With a good balance between advocacy and illuminating detail, a book that's sure to arouse interest in the deaf and respect for their accomplishments. Ample bibliography; b&w photos and index not seen. (Nonfiction. 10+)