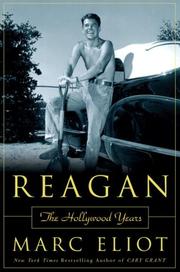 The late president was once a perennial second banana of middling looks and talent who dependably and forgettably assayed roles as the hero’s best friend in dozens of B movies during Hollywood’s Golden Age. This was, of course, before finding his true métier as a public speaker and political force in the tumultuous early days of Hollywood unions, most notably the Screen Actors Guild. Eliot paints the young Reagan as a Midwestern model of Rockwellian rectitude, a genial cipher with an unquestioning devotion to family, heartland values and a knack for self-promotion. Local celebrity as an athlete and radio sports announcer led to an undistinguished career in motion pictures, with the exceptions of his roles in Knute Rockne, All American and King’s Row, both of which interestingly found him declaiming classic dialogue from the sickbed. Eliot delves deeply into the precariousness of Reagan’s finances and ego during this period, as film after film failed to establish him as an A-list star and his marriage to the mercurial actress Jane Wyman ended in humiliating divorce. The image of Reagan pontificating about current events, filling the house with pipe smoke while Wyman writhed in crushing boredom, is a particularly poignant one. Much of the narrative focuses on Reagan’s self-actualization as a political animal through his deep involvement with SAG and its role in the blacklist and various other scandals, such as its underhanded dealing with Lew Wasserman’s MCA in negotiating residuals for its members. This occasionally dry material illustrates Reagan’s fuzzy drift from liberal Democrat to conservative Republican, as well as an apparently innate ability to cover his tracks with his aw-shucks charm and selective memory. The book ends with a determined Nancy Davis, herself a failed actress, steering her new beau toward a more socially desirable set of friends—well-connected, well-heeled conservatives—looking for a new pony to back after the flameouts of Richard Nixon and Barry Goldwater.

An enlightening, richly detailed and suggestively disturbing look at the American Dream and one of its truest dreamers.

MOVIE NIGHTS WITH THE REAGANS
by Mark Weinberg
Indie