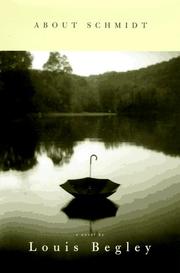 An elegant, precise, droll novel about a lawyer's startling transformation, by the author of Wartime Lies (1991) and The Man Who Was Late (1993). A recent widower (he and his wife Mary had seemed to exemplify the old New York ideal of elegance and accomplishment), retired at the age of 60 from his law firm, Schmidt, seemingly a poster boy for the now fading world of the cultured, wealthy WASP, is vaguely melancholy, faintly discontented, stranded in his wife's handsome beachfront house in Bridgehampton. His self-involved daughter Charlotte (a devoted member of the public relations department of a tobacco company) announces her intention to marry Jon Riker, a humorless lawyer from Schmidt's firm. Schmidt, who had built a very lucrative legal career on his ability to be ``always demonstrably and impeccably right,'' begins to feel the first stirrings of self- doubt. Does he object to Riker because he seems so one-dimensional, or because he's Jewish? And, with some amazement, he finds himself beginning an affair with a frank, exuberant waitress, a woman younger than his daughter. As Schmidt attempts to navigate increasingly turbulent waters (an outraged daughter, friends amused or appalled by his indiscretion), Begley deftly introduces long hidden pieces of Schmidt's former life. He was, it turns out, a tireless womanizer and a less-than-devoted dad. He's charmingly condescending toward those unlucky enough to be neither WASPS nor wealthy. He is, in fact, a bit of a cad. But it's one of the pleasures of Begley's increasingly dark narrative that he both reveals Schmidt's self-satisfied shortcomings and makes him nonetheless a fascinating character. And, as Schmidt faces a series of alarming problems (including his young lover's peculiar and softly menacing boyfriend), it's hard not to root for his success, for his newly aroused pleasure in life. A sly, sharp portrait of an amoral but appealing figure, and of the declining world of privilege that has shaped him.