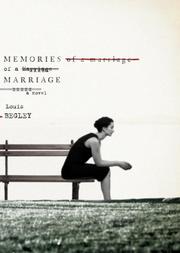 MEMORIES OF A MARRIAGE

Autumn turns to winter in this novel about an author of the novelist’s own generation, who reflects upon (among other things) the complex relationships between fiction and life, memory and truth.

The latest from the venerable Begley (Schmidt Steps Back, 2012, etc.) lacks the scope and dark humor of his multivolume “Schmidtie” saga, but it is nonetheless as sharply observed and subtly nuanced as most of his writing in its focus on class distinctions and destiny among the Eastern elite. It could pass as a novel from F. Scott Fitzgerald’s later decades, if Fitzgerald had lived so long. Its protagonist is Philip, an author of previously greater note, a widower who dearly misses his late wife, who was also a writer. Attending a ballet, he runs into an heiress whose reputation was compromised by her wild, erratic streak and whose ex-husband had died in an accident after a divorce that still left her bitter. Her name is Lucy, and Philip had once slept with her, which seems like a minor plot detail, because everyone had. The bulk of the narrative finds Lucy telling her version of her troubled courtship with and marriage to Thomas Snow, who was then her social inferior but later eclipsed her as a renowned businessman and economist. Both their son and the younger, prettier woman Thomas married after divorcing Lucy provide far different perspectives on the relationship, and those conflicting memories obsess Philip, who wants to fill in the blanks, untwist the contradictions and likely even write a novel with this marriage as raw material. (Perhaps even this very novel that Begley has written?) “But the book would be a novel,” he assures Lucy, “not a memoir or reportage...a mosaic, made of slivers of glass or stone, some picked up as I went along and some I had fabricated.” Since most of this novel is narrated through paraphrase—the protagonist’s spin on what he heard the other characters say—the reader must decide how much he can trust the narrator, a man in despair over “the utter futility of my existence, the books I was writing included.”

Less interesting as a novel than as insight into the mind of a novelist.