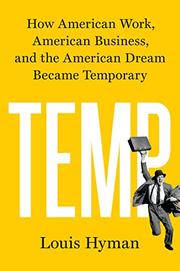 A revealing study of the “gig economy,” which, though it seems new, has long antecedents.

Speaking in the middle of a major recession, an entrepreneur named Elmer Winter told an audience of business executives that the complacent world of lifetime employment and job security would soon come to a screeching halt, the victim of rising labor costs and the need to compete globally. Winter’s speech, Hyman (Economic History/Cornell Univ.; Borrow: The American Way of Debt, 2012, etc.) slyly notes, came not in 2018 but in 1958, at the beginning of an era in which corporations began to transform into cash conduits meant to funnel quarterly dividends into the hands of shareholders rather than building carefully with an eye to the long term. In that scenario, the old values of workforce stability and risk minimization gave way to a different way of doing business, one in which layers of temporary workers were as important in commerce as adjunct faculty would become in academia. A principal driver in the transformation was the electronics business, which, as it morphed into the high-tech world of Silicon Valley, needed to be able to hire on the spot, let people go when demand slacked, and otherwise be nimble enough to change product lines quickly. Hyman, who writes engagingly, observes that this is not necessarily good nor bad; it’s just as it is. However, he does foresee trends that may improve conditions for consultants, freelancers, and temporary workers: Disintermediating technology will allow workers to position themselves in the marketplace. “Right now we are too fixated on upskilling coal miners into data miners,” writes the author. “We should instead be showing people how to get work via platforms like Upwork and Etsy with their existing skills.” Provided, one assumes, that Etsy is recruiting coal miners….

A quietly hopeful spin on an economic process that has proved tremendously dislocating for a generation and more of workers.