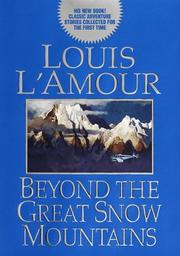 BEYOND THE GREAT SNOW MOUNTAINS

Superb stylist L’Amour returns (End of the Drive, 1997, etc.), albeit posthumously, with ten stories never seen before in book form—and narrated in his usual hard-edged, close-cropped sentences, jutting up from under fierce blue skies. This is the first of four collections of L’Amour material expected from Bantam, edited by his daughter Angelique, featuring an eclectic mix of early historicals and adventure stories set in China, on the high seas, and in the boxing ring, all drawing from the author’s exploits as a carnival barker and from his mysterious and sundry travels. During this period, L’Amour was trying to break away from being a writer only of westerns. Also included is something of an update on Angelique’s progress with her father’s biography: i.e., a stunningly varied list of her father’s acquaintances from around the world whom she’d like to contact for her research. Meanwhile, in the title story here, a missionary’s daughter who crashes in northern Asia during the early years of the Sino-Japanese War is taken captive by a nomadic leader and kept as his wife for 15 years, until his death. When a plane lands, she must choose between taking her teenaged son back to civilization or leaving him alone with the nomads. In “By the Waters of San Tadeo,” set on the southern coast of Chile, Julie Marrat, whose father has just perished, is trapped in San Esteban, a gold field surrounded by impassable mountains, with only one inlet available for anyone’s escape. “Meeting at Falmouth,” a historical, takes place in January 1794 during a dreadful Atlantic storm: “Volleys of rain rattled along the cobblestones like a scattering of broken teeth.” In this a notorious American, unnamed until the last paragraph, helps Talleyrand flee to America. A master storyteller only whets the appetite for his next three volumes.