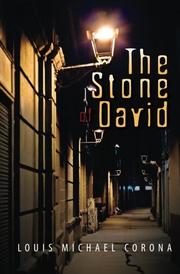 THE STONE OF DAVID

A New Orleans PI faces off against a crime boss and a drug-smuggling ring in Corona’s debut crime thriller.

When college student Billy Brewer dies from an overdose of 25i, a new synthetic drug flooding New Orleans’ streets, mom Nancy calls her brother, David Fournette, a former New Orleans cop now working as a PI. Finding the supplier is easy, but stopping him proves much harder: He’s Jim Marasco, son of Tony, a criminal with powerful connections. An all-too-convenient car accident takes care of Billy’s friend—and potential witness—John, but it seems that the bad guys have also targeted David when someone abducts his 14-year-old son, Tim. David and FBI pal Alan Smith, along with a helping hand from the FBI, are determined to put a stop to Tony by intercepting his legit importing business, an apparent front for smuggling 25i. Despite David’s private-eye status, the author’s novel isn’t much of a detective story. David’s involvement in the case, regarding both his nephew’s death and son’s kidnapping, is personal, and he gets an abundance of info and assistance from the feds and even an off-duty cop, Mark Harris. While readers hoping to trail a gumshoe scrutinizing clues will be disappointed, the book excels as a crime novel, especially in its thorough coverage of the villains. Tony, recognizing Jim as an unwanted agitator, tries to keep him out of trouble by sending him to Italy, where Tony gets his 25i; Jim is, predictably, no less a complication, his eye on Bella, wife to Tony’s Italian partner, Franco Romano. And Tony verifies that he is the most menacing of all lawbreakers—at least in New Orleans—when another gangster who may help police tie John’s murder to the crime boss winds up with a bullet in his head. The biblical analogy implied by the title doesn’t exactly apply: David is certainly up against a Goliath, but having the FBI at his disposal gives him much more than the proverbial stone. Still, his fight is both noble and courageous, traits befitting a worthy hero. A sequel will hopefully see him put his investigative noggin to the test.

An audacious crusade from a hero (and his friends) with chops.