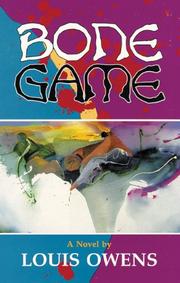 Owens returns to his Native American roots for this sprightly thriller, a sequel that lives up to its predecessor (Sharpest Sight, 1991). Cole McCurtain, a Choctaw Indian from Mississippi, is an English professor at the University of California at Santa Cruz. His life has been better: He's divorced and misses his daughter; he's bored with his job; a malevolent Native gambler from California's mission days is haunting his dreams (and sometimes his waking life as well); he's drinking heavily and not eating. Cole hardly takes notice when a psychopath begins killing and dismembering young women around campus. He only wants to retreat to New Mexico and fly-fish. The dreams, however, become increasingly sinister and ever more urgent as more people are slain. Back in Mississippi, an aged medicine woman begins to have the same visions. She, Cole's father, and his ancient great-uncle set out for California because they know that Cole is in danger and needs their help. Other murders are committed—murders that do not fit the serial killer's MO. Are there two madmen on the loose? Or is all of this the work of an ancient force of evil released to avenge the cruelty of the Spanish priests against the Indians centuries ago? Whether he likes it or not, it is Cole's destiny to find out. Aiding him in the search are his Mississippi relations, his daughter Abby (who has arrived to start school at the university), and the only other Indian faculty member—Alex, a transvestite Navajo. Owens writes about what he knows and does so with a sure hand—from the simultaneous fascination and repulsion of the dominant culture with Indians to the little stupidities of academia. A neat blend of elements of fantasy, mystery, and Native tradition. One suspects that yet another sequel is in the offing.