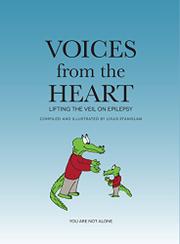 VOICES FROM THE HEART

Lifting the Veil on Epilepsy

A collection of essays by people affected by epilepsy sheds light on an often misunderstood disorder.

More than 3 million Americans have epilepsy, but despite its frequency, most people’s understanding of the condition is still “woefully deficient,” according to Susan Axelrod, the founding chair of Citizens United for Research in Epilepsy, who provides this book’s foreword. Debut editor Stanislaw, a documentary filmmaker living with the disorder, has put together a unique collection of nearly three dozen essays to “help lift the many misperceptions that surround epilepsy” as well as clarify the challenges that people with the condition “face every single day.” (It serves as an unofficial companion piece to the author’s 2016 documentary On the Edge: Living with Epilepsy.) Some essays are from people who have epilepsy; others are from family members and friends. They offer accounts of an unpredictable disorder that’s led to lost jobs, difficulty finding romantic partners, and the “fear of the unknown, the fear of embarrassment, and the fear of being ostracized.” Many of the essays are deeply moving, such as “Observations from the Foot of the Cross” by the Rev. Francis Hilton, whose sister has epilepsy and Alzheimer’s disease; he describes the agony of not knowing “if your efforts to maximize comfort and joy are working.” In “Reaching for the Stars with Epilepsy,” Amanda Rich candidly shares how her first seizure was “the start of an incredible journey, full of obstacles to overcome.” Some writers have just a passing experience with epilepsy, such as Jonathan Magaziner, who witnessed a fellow passenger’s seizure on an international flight, and David Mustine, who saw a professional acquaintance experience an epileptic episode. These latter entries lack the gut-punch intensity of some of the more personal accounts, but they do effectively draw attention to the confusion about how to properly respond to a seizure. (First-aid tips from the Centers for Disease Control and Prevention are also helpfully included.) In another essay, a teacher wonders why schools don’t focus on providing a safe space for students with the condition. Charming, full-color illustrations by Stanislaw add a lighthearted touch.

A powerful step forward in increasing knowledge of epilepsy and reducing the stigma surrounding it.