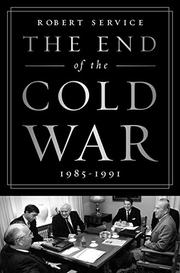 THE END OF THE COLD WAR

In this thoughtful re-evaluation of a stunning historical watershed, British Soviet specialist Service (Emeritus, Russian History/Univ. of Oxford; Trotsky, 2009, etc.) concentrates on the political maneuvering that was Byzantine and often wrongheaded but rarely dull.

In 1985, the Soviet Union’s elderly leaders knew that their backward economy was incapable of maintaining its superpower status. That year, Mikhail Gorbachev assumed power, vowing to change matters. His initial efforts produced deep suspicion in the United States, but Service writes that Ronald Reagan dreaded nuclear war far more than most advisers and led the way. From this point, the author offers an engrossing description of three years during which Reagan and Gorbachev led negotiations that vastly reduced the threat of war. Almost everyone approved of this course of action. Sadly, by 1988, Gorbachev’s liberal reforms had not revived the Soviet Union but reawakened nationalist, anti-Russian, and often nasty ethnic feeling, and his already moribund economy continued to decline rapidly. Exhilarated at the success of the U.S., American leaders delivered free-market platitudes but little aid in response to Gorbachev’s pleas. “Neither Reagan nor Bush,” writes the author, “was minded to bail him out—their priority was to secure international stability and America’s global primacy and they could see no benefit in subsidizing Moscow’s doomed economic reform. Behind the friendly façade of successive summits there lay American toughness in laying down the terms for conciliation.” Of course, in 1991, the Soviet Union disintegrated. Service emphasizes that victory over the Soviets was a good thing, but it was not a good thing to rub their nose in it. These days, Russians dislike America more than they did under Leonid Brezhnev and mostly approve of their pugnacious autocrat, Vladimir Putin, who aims to re-establish his nation as a major power and possesses the nuclear weapons to back this up.

A wholly satisfying, likely definitive, but not triumphalist account of the end of an era.

THE LAST OF THE TSARS
by Robert Service
Nonfiction

A HISTORY OF TWENTIETH-CENTURY RUSSIA
by Robert Service