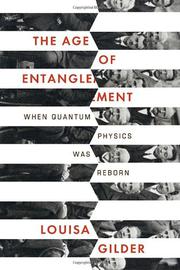 THE AGE OF ENTANGLEMENT

When Quantum Physics Was Reborn

Fast-paced history from debut author Gilder, who employs invented but historically accurate dialogue to surprisingly good effect, revealing the personalities as well as the ideas of quantum physicists.

Though generally viewed as a gigantic achievement of human genius, quantum physics, which describes the behavior of atoms and subatomic particles, is also a troubling field. Its predictions have proven dazzlingly accurate, but they predict minuscule objects behaving in ways that everyone, physicists included, finds bizarre. In the subatomic world, observers can never locate an object precisely, only determine the probability that it will be in one place instead of another. Energy and matter behave as either solid particles or waves depending on the experiment performed. Most physicists were happy that quantum physics worked so well, but Einstein insisted that this relentless indeterminacy could not be true. In 1935, he and two co-workers devised the Einstein-Rosen-Podolsky “thought experiment” (“thought” because it was considered technically impossible). If two subatomic particles are “entangled,” a state that obeys quantum laws, and then separated, changing one affects the other even if it’s very far away. Since this is clearly impossible, Einstein concluded that quantum theory was defective. Gilder, remarkably well-informed, delivers a comprehensive history that begins with early 20th-century giants Planck, Bohr, Heisenberg, Schrödinger and Pauli. However, she differs from the authors of similar books in devoting even more space to less celebrated but equally brilliant physicists from the century’s latter half, including David Bohm, Anton Zeilinger and John Bell. Her inspiration is Bell, who died in 1990 before getting the Nobel Prize everyone agrees he deserved. His 1964 paper, showing that the Einstein-Rosen-Podolsky experiment did not disprove quantum theory, inspired a generation of researchers who have clarified quantum physics without rendering it less bizarre. Although aimed at general readers, this work is less simplified than other popular accounts, but those who pay attention will find it highly rewarding.

A tour-de-force by a talented young author who makes a difficult subject accessible.