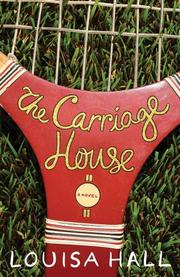 William Adair is the central hub around which a cast of insightfully depicted female characters revolve: Margaux, his wife, waltzing into a world of forgetfulness with early onset dementia; Louise, an aspiring writer from Australia hired on as Margaux’s caretaker; Adelia, William’s childhood friend and woulda-shoulda-coulda-been sweetheart, who comes to live with the family to help care for William after he suffers a stroke; and William’s three daughters. Trying to rescue the historic carriage house built by William’s grandfather, but now owned by a neighbor due to a zoning error and scheduled for demolition, is the cause that unites the women of William’s life. Elizabeth, the oldest daughter, once an actress on the way to success in Los Angeles, is back home with her two daughters after a heartbreaking divorce. Diana, once a tennis champion and president of her school, has returned home instead of defending her architecture thesis at university. Isabelle, the youngest and still a teenager, rebels against everything and everyone. The carriage house is not only the common cause that brings the women together, it is also the symbol of lost and rediscovered loves, dreams and aspirations as it first burns to the ground and then is rebuilt according to Diana’s design and under her supervision.