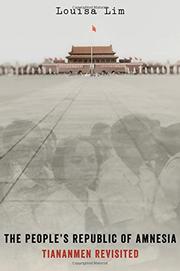 THE PEOPLE'S REPUBLIC OF AMNESIA

The author expertly traces how the regime’s initial success in “enforcing amnesia and whitewashing its own history” is beginning to unravel. Ironically, recruits to the press and security institutions lack the detailed knowledge required to fully maintain its censorship and surveillance. Still, each June 4, umbrella-toting men take up position at the scene of the blood bath, and censors of weibo (China's Twitter equivalent) search for keywords like “today,” “tomorrow” and “sensitive word.” Lim has mainly reconstructed the events leading to the massacre from the accounts of former student leaders, representatives of the organization of mothers of students killed and former party leaders, among others. The author contends that China's subsequent economic rise has been built on a cultural and political reorganization adopted since the tragedy. She details how campaigns of repression conducted under the slogans of “the era of stability maintenance,” and reinforced by a nationalist rewriting of the country's history, have provided a political smokescreen for the emergence of large-scale corruption. Recounting her interviews, Lim ridicules a society in which becoming “a corrupt official” has become a legitimate ambition. The author’s interviewees, many of them under visible surveillance, show how this has worked. Some raise questions about the events—e.g., whether the student movement was unique or part of a deeper internal struggle within the communist leadership—and wonder how the massacre could have been avoided. Others reflect on the spread of a crude materialism. Wu'er Kaixi, who participated in the events as a dissident, remains absolutely convinced that “it's the government's responsibility.”

A forceful reminder that only by dealing with its own past truthfully will China shape a decent future for coming generations.