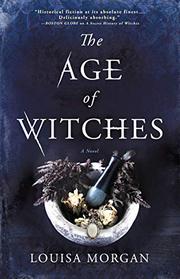 THE AGE OF WITCHES

Three witches attempt to magically alter their futures at the end of the 19th century in this historical fantasy novel.

The third entry in Morgan’s (The Witch’s Kind, 2019, etc.) thematically connected series of witch novels centers on two descendants of real-life Salem witch Bridget Byshop who wage magical war over the fate of a headstrong teenager. Living in New York City in 1890, distant cousins Harriet and Frances trace their ancestry back to Bridget’s two daughters. Frances’ ancestor inherited Bridget’s "maleficia," a book of black magic, which would-be socialite Frances intends to use to force her stepdaughter, Annis, into a loveless union with a British marquess to secure her own place in New York society. Harriet has devoted her life and craft to helping women in need, so when she overhears Frances’ plans for Annis—who is also Harriet’s great-niece and one of Bridget’s descendants—she follows them to England. Women’s inability to control their own destinies is clearly a theme here, but the novel’s heavy-handed treatment makes this message more burdensome than enlightening. When she realizes that a forced marriage is set to shatter her dream of breeding her own line of racehorses, Annis melodramatically laments that she is “for sale, like a filly at the horse market.” Morgan's failure to differentiate between voices—conversations between Annis and Frances are nearly indistinguishable from those between the marquess and his mother in both subject matter and vocabulary—makes it difficult for the reader to connect with the characters’ plights, even at the novel’s climax, as does a jarring opening that quickly alternates between point-of-view characters and pauses several times for lengthy backstory. For all of Frances’ dealings in darkness, an unnecessary attempted rape scene caused by black magic provides the story’s only true moment of suspense.

An underwhelming novel that often gets too heavy-handed with its theme.