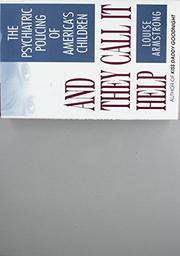 AND THEY CALL IT HELP

The Psychiatric Policing of America's Children

An eye-opening journey into the world of children in residential treatment centers, psychiatric hospitals, and other therapeutic institutional settings. Outspoken and outraged, Armstrong continues the victim-as- perpetrator theme she explored earlier in her work on domestic violence (The Home Front, 1983) and incest (Kiss Daddy Goodnight- -not reviewed). Here, she attacks psychiatry as a form of ideological imperialism that claims an ever-growing list of behaviors, feelings, and thoughts as problems that require treatment. According to Armstrong, society's acceptance of the labeling of ordinary human problems as ``mental illnesses'' has meant that children who are unwanted or whose behavior troubles their parents, teachers, or guardians are increasingly being treated with incarceration and drugs. The author looks at the marketing of psychiatric services and interviews those who operate treatment centers, as well as the kids who have spent time in them. Abuses are apparent, and Armstrong makes clear her exasperation with the system she's examining. But what really makes her blood boil is the jargon she finds in The Diagnostic and Statistical Manual of Mental Disorders, the standard reference by which psychiatry defines the conditions that it treats. Since the 1950's, the list has grown from some 60 types of mental illness to hundreds of ``mental disorders'' like tobacco dependence and school-learning problems. When such conditions become labeled as illnesses, insurance companies reimburse therapists for treating them, and the mental-health industry thrives. Armstrong rails at society's acceptance of this process and the harm it's inflicting on children—whom she views as often the innocent victims of society's ills in the first place. In the tradition of old-fashioned muckraking journalism- -clear in its anger and in its call for change—and sure to evoke heated responses from psychiatrists and their allies.