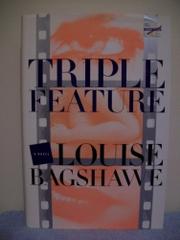 Newcomer Bagshawe, 25, takes the Swell Trash baton from Judith Krantz with a dead-on Hollywood hit. In an Americanization of her British bestseller The Movie, Bagshawe brings some rock 'n' roll and a few Gen-X trappings to the traditional sex-and-shopping romance, while sticking to the basics of the genre in timeless escapist fashion, with soul-wrenching copulation on navy-blue satin Pratesi sheets and equally explicit and detailed descriptions of oral sex and the secrets of makeup. Three women come to Los Angeles to make movies, have sex, and find love: Megan Silver, the mousy young scriptwriter from San Francisco, who writes a blockbuster and diets her thighs off; Eleanor Marshall, the ``ice queen'' CEO of her studio, the most powerful woman in Hollywood, who's dealing with biological-clock issues; and supermodel Roxana Felix, whose skill in bed gets her anything her perfect face and body cannot. Megan is waltzed off her job waitressing at a Hollywood fast-food restaurant by sleazoid young agent David Tauber (great pecs, no soul), who, with his classier superagent boss Sam Kendrick, is using her brilliant script as the glue in a big-deal movie package to be produced by Eleanor and her mentor protÇgÇ Tom Goldman, with whom she has been in love ever since she was a gangly young Yalie desperate for his attention. The male star will be Megan's wolf-eyed rock hero Zach Mason, who makes her his woman in a misty forest on the Seychelles; the director will be the genius of his generation, Fred Florescu; and the female star is cold and calculating Roxana, wounded as a child in ways one frequently hears about on Sally and Oprah. Smart and fun, with perhaps too much Brit label-dropping for an American audience, but distinguished by a shameless sensibility that blithely, repeatedly goes over-the-top.