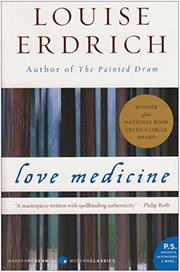 Called a novel, Erdrich's book of powerful stories interlocks the lives of two Chippewa families in North Dakota, the Kashpaws and the Lamartines (though some are Morrisseys too, and Nanapushes)—a tribal chronicle of defeat that ranges from 1934 to the present. Illegitimacy, alcoholism, prison, and aborted dreams of something better mark both clans; and the fluidity of exchange between them is echoed by poet Erdrich's loose, time-shifting approach—an oblique sort of narration that sometimes makes it difficult to remember who's who among the characters. Even when hard to follow, however, this web of stories keeps its theme vividly in focus: the magical haunting that reminds the various generations of the families of their basic identity. And, whether the haunting comes in the form of nightmares or supernatural powers, Erdrich convinces us that these people, sunk as low as imaginable, retain powers, the "love medicine" of the title. (When, astoundingly drunk, Gordie Kashpaw hits a deer on the road with his car, he drags it into the car, onto the backseat; the deer, merely stunned, awakens—and Gordie soon knows that the deer is also his dead ex-wife June, whom he must kill again. "Ears pricked, gravely alert, she gazed into the rearview and met Gordie's eyes. Her look was black and endless and melting pure. She looked through him. She saw into the troubled thrashing woods of him, a rattling thicket of bones. She saw how he'd woven his own crown of thorns. She saw how although he was not worthy he'd jammed this relief on his brow. Her eyes stared into some hidden place but blocked him out. Flat black.") Erdrich fuses mystery and violence, exaltation and deepest despair—so poetically that the rich prose sometimes clots. But, despite flaws and excesses, this is a notable, impressive book of first fiction: the unique evocation of a culture in severe social ruin, yet still aglow with the privilege and power of access to the spirit-world.