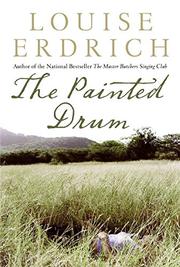 The drum is found, in a New Hampshire farmhouse following a sudden death, by Faye Travers, a middleaged divorcée of mixed ethnic origin, whose complicated personal life dominates the novel’s expository opening section. She’s a former drug user, now living with her mother Elsie and sharing the duties of Elsie’s “estates business”; the lover of a moody German sculptor, and an assiduous observer and considerer of birds, other natural phenomena and persistent memories of her younger sister Netta’s accidental death in childhood. Reasoning that the drum—found among a white family’s possessions—was “stolen from our own people,” Faye absconds with it, then travels west with Elsie to the Ojibwe reservation to which they’ll return it. The drum then “tells” its story, in three interconnected narratives. The first details the sundering of “old Shaawano’s” family when his wife Anaquot, “burning” with love for another man, flees with her illegitimate baby and older daughter, inadvertently sacrificing a child’s life to a pack of starving wolves. The second relates further consequences of Anaquot’s folly, then tells how Shaawano, inspired and burdened by “visions” of a dead child, painstakingly fashions the drum (“a container for the spirit, just as if it were flesh and bone”). The third story reveals how, two generations later, the drum sounds again, and three children left alone in a freezing house and subsequently lost in frigid darkness, hear its “healing” music. Erdrich draws us into her exquisitely detailed world effortlessly, and even this novel’s frequent excesses of summary cannot blunt the power of its narrative ingenuity and luminous prose. The worlds of ancestry and tradition, humans and animals (notably, wolves and ravens), living and remembering and dreaming, are here rendered here with extraordinary clarity and insistent emotional impact.

Hard to believe, but Erdrich just keeps getting better.