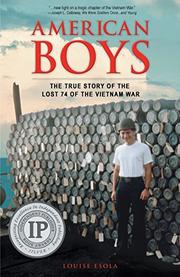 The True Story of the Lost 74 of the Vietnam War

This is history at its best: the riveting, realistic story of courageous sailors forgotten by their country.

During an exercise in the South China Sea on June 3, 1969, the destroyer USS Frank E. Evans was split in half after colliding with an Australian aircraft carrier. Seventy-four men perished. Although the ship was actively engaged in the Vietnam War, the names of these men have never been placed on the Vietnam Veterans Memorial in Washington, D.C. In her first book, seasoned journalist Esola brings the events and people involved vividly to life. She begins with a double-barreled prologue: first, a powerful description of the memorial wall, ending with Ann Armstrong Dailey’s realization that her brother Alan’s name is not on it. “It was like he was dead all over again,” their sister said. Next, a gripping account of the ship’s final moments puts readers right in the middle of the action: “Everything was going, rolling, topsy turvy. And fast.” What follows is a comprehensive yet uncannily personal history of this arcane footnote to the Vietnam War. Esola inhabits the minds and hearts of all players, from sailors to admirals to Kennedy, Johnson and Nixon. Many men, she discovers, joined the Navy (some at the behest of their parents) to avoid being drafted into the Army. She moves easily from their personal stories to politics to the reasons WWII vintage ships like the Evans—a “floating paint bucket”—were still in service. The story proceeds from the men’s enlistments and the ship’s role in Vietnam through to the accident and its aftermath. Later, Esola’s own growing involvement forces her to abandon journalistic detachment and join the effort to have these men recognized. Replete with black-and-white pictures, endnotes and incredibly detailed research, this book is both comprehensive history and a beautifully written human tale that reads like a novel: “Eunice Sage wore a short-sleeved black suit and matching gloves; a gold rose pinned to the center of her blouse glistened in the sun.” It should appeal not only to readers of military history, but to anyone who enjoys a well-told, fascinating tale.

An intriguing, well-written and poignant work that transcends its historical genre.