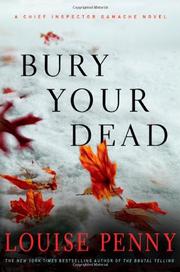 Chief Inspector Gamache of the Canadian Sûreté and his associate Jean Guy Beauvoir are slowly healing from a case that turned horribly bad. Gamache spends hours reading in Québec’s Literary and Historical Society library. Beauvoir, at Gamache’s instigation, reopens the Three Pines murder enquiry that sent B&B owner Olivier to prison. While Beauvoir quietly interrogates the gently eccentric residents of Three Pines (The Brutal Telling, 2009, etc.) to see whether anyone else had motive to kill a hermit for his antique treasures, happenstance lands Gamache in the middle of another murder case. Augustin Renaud, obsessed with finding the burial place of idolized Québec city founder Samuel de Champlain, lies dead in the library’s basement. The riddles of who killed him and why force Gamache and his aging mentor Emile to examine 400 years of Québec history. As they delve for clues among the library’s old journals and diaries, they focus ever more closely on the endless rancor between the French and the English.

Gamache’s excruciating grief over a wrong decision, Beauvoir’s softening toward the unconventional, a plot twist so unexpected it’s chilling, and a description of Québec intriguing enough to make you book your next vacation there, all add up to a superior read. Bring on the awards.