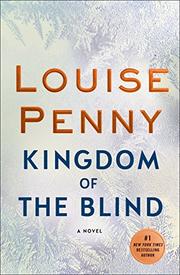 KINGDOM OF THE BLIND

The Chief Superintendent of the Sûreté du Québec finds himself in a unique position: He's tangled up in the life of a recently deceased woman, and it doesn't involve her murder.

As the first snowflakes of a major storm start to fall, Chief Superintendent Gamache is standing in front of a crooked house in the middle of the woods, unsure of whom he will find inside. Curiosity is what brings him here after receiving a vague invitation in the mail. But is there danger waiting beyond the door? It's what Gamache has been trained to anticipate. Currently suspended from his Sûreté post during the investigation into the controversial events of Glass Houses (2017), Gamache must remember he's here on unofficial business. He and two others who arrive at the house learn that they've been named executors of a will belonging to a woman they never knew in life. Stranger still, the woman, who called herself the Baroness, has left millions to her three children, money everyone is shocked to hear about. Her secretiveness was fueled by generations of family bitterness and resentment. And though it may seem like Gamache has all the time in the world to dive into this dark history, his attention is in fact divided: The deadly opioid that slipped untraced into Montreal under Gamache's watch is expected to hit the streets any day—a most unsettling thought. Penny reveals a deeper vulnerability in the introspective Gamache; is it possible he's not quite sure of himself anymore? A theme of desperation plays out in both story arcs, as characters from all walks of life move between hope and despair and traverse the fine line that separates them. The main mystery pales in comparison to Gamache's interior story, and the decisions he makes are sure to raise a few eyebrows. Moral duty has been synonymous with our hero, but Penny seems to be pushing her characters in new directions with this installment: “[Gamache] considered his options and the atrocity he was about to commit.” The ending is adrenaline-filled but, no, not because of the mysterious will.

This starts as a small-town mystery and becomes something grander and more frightening; Penny has upped her thrills-to–pain au chocolat ratio.