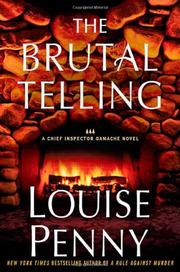 From the Chief Inspector Gamache series

Chief Inspector Gamache of the Canadian Sûreté is again called to restore order to the tiny Quebecois hamlet of Three Pines.

Olivier and Gabri, gay owners of the Bistro and B&B, insist they that they don’t know the dead man and can’t imagine how he came to be lying on their floor. That’s not quite the truth, but it’s merely the setup for the first of many surprises. The real story will unravel for Gamache and his subordinates Beauvoir and Lacoste in startling ways. These include the discovery that the corpse has been moved three times by two different people; the return of a father declared dead over 20 years ago; a word woven into a spider’s web; and the disclosure of several wood carvings emanating evil that require Gamache to fly to British Columbia and inspect totem poles. Priceless antiques sequestered in a hermit’s cabin and sorrowful tales of Czech citizens cheated of their belongings will come to light before Gamache, to his considerable distress, will have to arrest a friend.

Penny (A Rule Against Murder, 2009, etc.) is a world-class storyteller. If you don’t want to move to Montreal with Gamache as your neighbor—or better yet, relocate to Three Pines and be welcomed into its community of eccentrics—you have sawdust in your veins, which must be very uncomfortable.