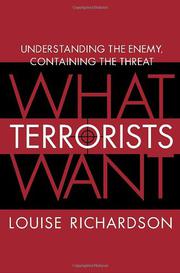 Understanding the Enemy, Containing the Threat

The short answer? Fame and payback, perhaps even a thrill. The long answer? Read this essential, important primer.

Terrorist groups have many motives and ideologies, notes Richardson (Executive Dean/Radcliffe Institute for Advanced Study), but they tend to similar paths: They are founded by mature, well-educated men but staffed by less learned and certainly more pliable youths; they are fueled by a sense of injustice and the conviction that only they are morally equipped to combat it; they see themselves as defenders and not aggressors; they often define the terms of battle. And, of course, this commonality: “Terrorists have elevated practices that are normally seen as the excesses of warfare to routine practice, striking noncombatants not as an unintended side effect but as a deliberate strategy.” Thus massacres, suicide bombings and assassinations are all in a day’s work. Richardson argues against Karl Rove, who after 9/11 mocked those who tried to understand the enemy, by noting that only when authorities make efforts to get inside the minds of their terrorist enemies do they succeed in defeating them, as with the leadership of the Shining Path movement in Peru. Still, as Rove knows, if terrorists share a pathology, then so do at least some of their victims: Once attacked, people in democratic societies are more than willing to trade freedom for security. Richardson closes by offering a set of guidelines for combating terrorism, with such easily remembered rules as “Live by your principles” and “Engage others in countering terrorists with you”—observing, in passing, that the Bush administration’s attack on Iraq and subsequent occupation will likely be remembered as serving as a recruiting poster for still more terrorists.

How to win? Develop communities, settle grievances, exercise patience and intelligence. That said, watch for more terrorism to come: “We are going to have to learn to live with it and to accept it as a price of living in a complex world.”