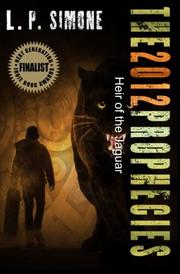 Heir of the Jaguar

The world seems to be on the brink of destruction, as the Maya people might have predicted, and its fate might just rest on the shoulders of a single teenage boy in Simone’s debut young-adult thriller.

As far as Cory McClintock knows, he’s a normal kid. The only thing distinguishing him is that, when he was a baby, his father adopted him from a Maya woman who had begged him to take care of her son. One day, when Cory arrives home from school, he discovers his dad unconscious and bleeding; Cory is immediately kidnapped at gunpoint by Culebra, a man claiming to be his uncle, who takes him to Guatemala. According to Culebra, Cory is the latest in a line of Maya kings who have the ability to reshape the world in the last days of the Maya calendar, a time of planetary upheaval and rebirth. Culebra plans on sacrificing him on an altar, thus taking Cory’s power for himself. Simone has crafted a taut novel that’s impressive for its razor-edge suspense as well as its verisimilitude. Written in first-person present tense, the prose is incredibly tight, sharp and intelligent. Cory never comes across as anything less than a fully believable young man, despite the bizarre circumstances in which he finds himself. His attempts to escape his uncle’s clutches provide nail-biting suspense. Given the novel’s title, one might expect an exploitation of ancient culture, but Simone’s tale has the utmost respect for Maya civilization as the narrative spins a sensationalist tale out of a modern interpretation. The story ultimately illuminates Maya beliefs, while managing to pay homage to pop culture’s apocalyptic interpretation.

The relatable, refreshingly non-Caucasian protagonist will take readers on an action-packed cultural adventure.