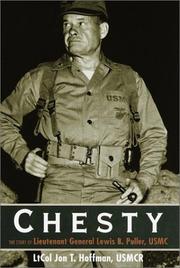 The Story of Lieutenant General Lewis B. Puller, USMC

A powerful and often controversial military biography of the US Marine Corps’ legendary Lieutenant General Lewis B. “Chesty” Puller.

Military historian (and Marine Corps Reserve lieutenant colonel) Hoffman (Once a Legend, not reviewed) unravels the complex personality of the officer held up by Marine Corps culture as the quintessence of aggressive combat leadership. The author traces Puller’s fighting instinct to a desire to live up to standards of military service that were rooted in his family’s Civil War heritage. This heritage, he argues, led Puller to enlist in the Marine Corps immediately after graduating from the Virginia Military Institute, in order to test his own courage and win glory on the WWI battlefields. Hoffman shows how, when WWI ended before he had completed his training, Puller doggedly pursuing his dream of becoming a Marine Corps officer by volunteering for service in Nicaragua, where he earned an early reputation as a tactically competent and ferocious fighter. He then follows Puller’s celebrated career into WWII and Korea, chronicling his personal bravery and inspiring leadership in the brutal Pacific fighting on Guadalcanal, Cape Glaster, and Peleliu, as well as his key role in making MacArthur’s audacious Inchon landing a success. Despite his successes, Puller has been accused by some of unimaginative tactics and reckless expenditures of young marines’ lives. Although Puller often fell short as a formal operational planner, Hoffman effectively argues that he compensated for this by always sharing the risks and conditions of combat with his enlisted men—and thus inspiring his marines to complete their missions no matter what the sacrifice.

A candid assessment that strips away the colorful legends about “Chesty” Puller and replaces them with a more valuable legacy—the importance of caring for military subordinates and leading from the front in the face of overwhelming odds. (16 pages b&w photos, maps)