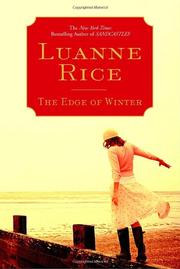 THE EDGE OF WINTER

The removal of a submerged WWII relic creates unlikely alliances.

Rice (Sandcastles, 2006, etc.) again introduces a stalwart heroine of Irish heritage who’s all but given up on love. This time, the lass in question—Neve Halloran—is a divorced mother running a tiny seaside gallery. Neve was badly bruised by her divorce from Richard, a drinking rogue who made empty promises. Her teenage daughter, Mickey, is the lone source of vibrancy in Neve’s life. Mother and daughter share many traits: intelligence, a tender heart and a love of nature. While other teens get their kicks from beer bashes and trips to the mall, Mickey is a budding ornithologist. When a greedy land-developer announces a plan to dredge up a sunken German submarine resting in the town’s cove, the Halloran ladies spring into action to preserve their beach. Raising the submarine would ruin the fragile ocean ecosystem and destroy the habitat of Mickey’s beloved birds. Mickey and her surfer boyfriend, Shane, take up the charge to keep the sub in its watery grave. The teenagers befriend the local park ranger, Tim O’Casey, in their campaign. Ranger Tim’s family has some mysterious links to the submarine, and he joins the effort to stop the developer. It turns out Ranger Tim is a great match for Neve, but the reluctant lovers must figure out a way to trust each other in order to save the things they hold dear.