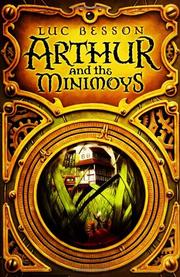 ARTHUR AND THE MINIMOYS

Take equal parts of The Triplets of Belleville, Lemony Snickett, Middle Earth, Star Wars, the Arthurian legend, and of course, Harry Potter, and you get a slightly mad director’s (The Fifth Element) idea of a children’s fantasy. This is just awful and it’s only the first half. However, it might possibly make an interesting movie, promised for 2006, especially since it reads like a script rather than a novel and it practically reeks with stage directions. Arthur lives with his grandmother; his parents, for unknown reasons, only call in occasionally, like for his tenth birthday. On that day, the evil Davido threatens his grandmother’s ownership of their home and garden, as grandmother is short of funds since her husband disappeared four years earlier. Grandfather Archibald was a famous anthropologist; using some of his artifacts, Arthur escapes to the land of the Minimoys, small folk who live actually under his own garden, and whose existence is threatened by said Davido, who wants to pave it all. So he pulls the sword from the stone and takes off with the snarky princess and her brother in search of he-who-must-not-be-named. To be continued. Gregor the Overlander, anyone? (Fiction. 8-12)